So I'm over here at the Cove chilling with my main man Joey, the best bartender in town. As Joey whipped me up one of his masterful concoctions I knew it would be 2 things delicious and thirst quenching. I don't know if it was the age of the scotch I drank or something else but I began to contemplate, a different type of thirst, you know the lust or wanting of affection or attention from the opposite sex. I wondered what life would be life if I didn't have the means to quench my thirst. Then I realized how fortunate I am to live the life of a Savage, because having your thirst quenched and the ability to do so is a rewarding feeling. See everyone has a moment of thirst. Don't be ashamed it’s perfectly normal. The problem is that most people do not handle thirst in appropriate ways. See Savages do not have problems with thirst quenching, squares and most marks always do.

Square and some marks do not know the rules of Thirst Management. So they set up different schemes and tricks. This is a continuous back and forth. Marks normally smarten up because of the overall weakness and lameness of the schemes and tricks of the square are. The Squares on the other hand never does, so they use the same tricks over and over and constantly fall for those of the mark.

One of the many tricks that the squares utilize to attempt to get the upper hand over the mark is the thirst trap. The Thirst Trap came about the same time the ancient Egyptians invented the 365 day calendar. What is a thirst trap some of you may be asking, well it is a one sided attempt by the common square to open up direct lines of communication with an uninterested mark. See squares from many different cultures rely on the calendar because it tells them when important dates are, which is key when they plan out the thirst trap. Social networking is the Mark's greatest foe against the battle of thirst traps. Social networks reveal much information about the mark and the square engages in an act called lurking, spying either online or in person while remaining invisible, to find out the marks' interest, hobbies, and birthday. When the Square absorbs enough information from this dishonorable behavior he sends a message to the mark. These messages normally pertains to the interest or hobbies of the mark, wishing of a Happy Birthday or Holiday, which can be just as easily done on a public post. The mark that suffers the most from this thirst trap is the one that does not diagnose Squareitis during the first encounter. Failing to do so, the mark establishes a direct line of communication with the square and his thirst making them susceptible to square game. This eventually leads to thirst messages, a written expression of one's thirst. Thirst messages from the Square consist of but are not limited to:

"Good morning beautiful, hope today is a wonderful day for you"


"So When We Face-timing" 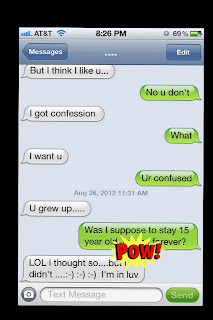 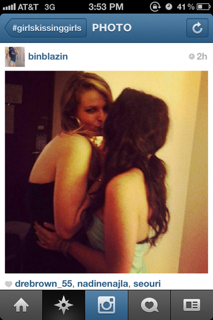 Perhaps the thirstiest, a picture of the gas gauge with the low fuel message with a caption; "My sex life is just like my gas tank... empty" - SMH. 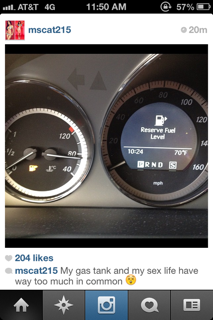 The square does not see this trap, causing them to attempt some of their most reckless thirst traps possible and in some cases send a ridiculous amount of thirst messages that are ignored. 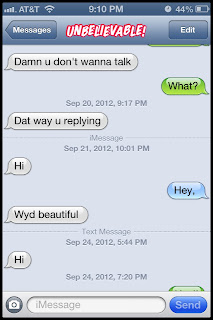 This influx of thirst traps from squares makes them easily visible to marks. This has results in a mark’s low self-esteem to rise to high levels. Resulting in a need only savages can fill . From time to time a square's thirst grows so unbearable they start attempt to set thirst traps on female Savages. mistake Female savages are known to post pictures of squares thirst traps out of pure enjoyment and to send a clear message to other squares.This has been seen on numerous social networking sites as well as this blog. 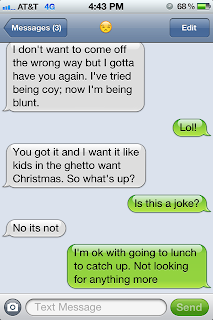 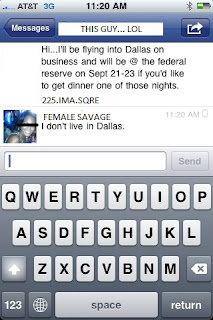 This only scratches the surfaces of the thirst.There are many types of thirst and one needs an arsenal of techniques to not be snared by the traps or become a victim of thirst. This is a solid foundation of the thirst. Tomorrows lesson will inform you as to why people use these traps and go in deeper into the type of traps and instruct you how to avoid them. 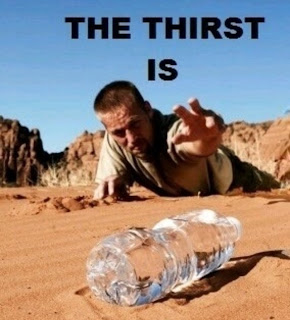 Lurking: \ˈlərk- iŋ\ (v): the act of spying on others, either online or in person, while remaining invisible; sneaky. Loneliness, envy, lack of social life, and too much time on one's hand are the most common causes of lurking.

Thirst: \ˈthərst\ (n): A desperate form of lust or wanting of affection or attention from the opposite sex, resulting in the neglecting of personal respect and pride to establish a link with the thirstee.

Thirstee: \ˈthərst- ˈē\ (n): The focal point of one's thirst ; in some cases the recipient of one's unwanted and annoying thirst.

Thirst Messages: \ˈthərst ˈme-sij\ (n): a written expression of one's thirst. Text messages, e-mails, comments on pictures, and the flooding of inboxes are the most common forms of thirst messages.These messages show all the cards in one’s hand. Lack of knowledge of Mackonomics is the main reason of thirst messages.

Thirst Trap: \ˈthərst ˈtrap\ (n): a one sided attempt to open up direct lines of communication with an uninterested party; recent studies established that there is a direct relationship between the quantity of thirst traps and the rising of social networks.